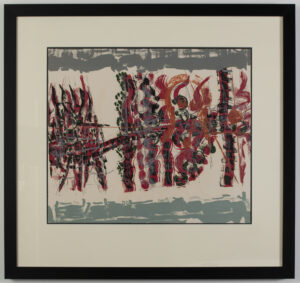 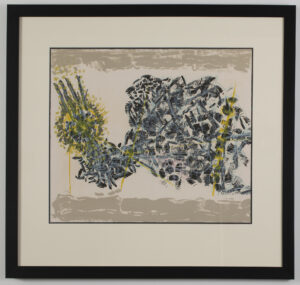 Jean-Paul Riopelle,  (1923 – 2002) was one of Canada’s most significant 20th century artists and the first Canadian painter (since James Wilson Morrice) to attain widespread international recognition. He studied under Paul-Émile Borduas in the 1940s and was a member of Les Automatistes, a group of Montreal artists who were interested in abstractionism and automatic drawing born out of the unconscious mind. He was one of the signers of the Refus global manifesto that rejected the social, artistic and psychological norms and values of Québécois society.

His professional career got off to a flying start in 1949 with his first solo show in Paris at the Galerie La Dragonne, an occasion marked by the publication of his first exhibition catalogue, which featured a poetic text by André Breton. This was followed by numerous group shows in France, Italy, Spain, England and Sweden in the early 1950s. From 1954 onwards, he had regular exhibitions at the Pierre Matisse Gallery in New York. Galerie Maeght in Paris took him on in 1966, dedicating a show to his work every two years. The Musée national des beaux-arts du Québec devoted a retrospective to him in the summer of 1967. Later, in 1972, a major exhibition entitled Ficelles et autres jeux was held at the Canadian Cultural Centre in Paris, and at the Musée d’art moderne de la Ville de Paris. In 1981-82, the Musée national d’art moderne (Centre Georges-Pompidou) organized a major retrospective of his work that was later presented at the Musée national des beaux-arts du Québec, the Musée d’art contemporain de Montréal, and museums in Mexico and Venezuela. The Montreal Museum of Fine Arts also devoted a retrospective to Riopelle in 1991, to celebrate the inauguration of the Museum’s new Jean-Noël Desmarais Pavilion.

In 1992, it was announced that Joan Mitchell, his companion in Paris for almost 20 years, had died. Riopelle, shattered by the news, turned his hand to painting once again, producing the largest work of his career, the Hommage à Rosa Luxemburg, a triptych. It was painted on a huge canvas that Riopelle unrolled as his composition progressed; it was later hung on wooden stretchers that measured approximately 40 metres. This work is now on display at the Musée national des beaux-arts du Québec in Quebec City.

Riopelle is best known for his abstract painting style, in particular his “mosaic” works of the 1950s when he famously abandoned the paintbrush, using only a palette knife to apply paint to canvas, giving his works a distinctive sculptural quality. In the 1960’s he added ink on paper, watercolours, lithography and collage to his artistic output. These prints are from the 1980s.

Stewart McKelvey uses cookies to improve user experience, and analyze website traffic. We may share your site data with our analytic partners, however this data is anonymous and does not identify you personally. By clicking “accept”, you agree to allow cookies to be stored on your device. To find out more, please visit the cookies section of our Privacy Commitment Notice.

Stewart McKelvey uses cookies to improve user experience, and analyze website traffic. We may share your site data with our analytic partners, however this data is anonymous and does not identify you personally. By clicking “accept”, you agree to allow cookies to be stored on your device. To find out more, please visit the cookies section of our privacy policy.
Necessary Always Enabled
Necessary cookies are absolutely essential for the website to function properly. These cookies ensure basic functionalities and security features of the website, anonymously.
Functional
Functional cookies help to perform certain functionalities like sharing the content of the website on social media platforms, collect feedbacks, and other third-party features.
Performance
Performance cookies are used to understand and analyze the key performance indexes of the website which helps in delivering a better user experience for the visitors.
Analytics
Analytical cookies are used to understand how visitors interact with the website. These cookies help provide information on metrics the number of visitors, bounce rate, traffic source, etc.
Advertisement
Advertisement cookies are used to provide visitors with relevant ads and marketing campaigns. These cookies track visitors across websites and collect information to provide customized ads.
Others
Other uncategorized cookies are those that are being analyzed and have not been classified into a category as yet.
SAVE & ACCEPT
Scroll To Top